Sarina Villareal explores the outcome of memory degradation in her most recent body of abstract paintings she calls the Garden series. Villareal begins her process by studying the physiology of a botanical in order to create a neuro-chemical “memory trace” of the plant. Some time later, Villareal paints a ‘portrait’ of the floral working from solely from that memory. Due to what psychologist Edward Thorndike calls “Decay Theory,” recollection of finer aspects begin to diminish almost immediately. Villareal’s canvases capture this theory with foggy environments both engulfs and reveals details of the floral.

“The Decay Theory states that when new information is learned, a neuro-chemical ‘memory-trace’ is created on the mind. If the information is not rehearsed, it becomes harder for neuro pathways to retrieve the information,” explains Villareal. “I chose to paint florals because of their physical complexity. Botany is an extensive subject that will give me a great number of avenues for new learning … and plenty of opportunity to forget.”

Sarina Villareal holds an AS in graphic design and BFA in painting from the University of Houston. Since leaving an award-winning career in advertising and relocating to Salt Lake City in 2008, she has been a participating artist in many art festivals including the Kimball Park City Arts Festival and has been selected to be a part of several group and a solo gallery shows in Utah and California. Recent publications include ‘Studio Visit’ magazine and ‘International Contemporary Artists.’ Villareal is represented by 15th Street Gallery in Salt Lake City, UT. To see her work visit: www.sarinavillareal.com 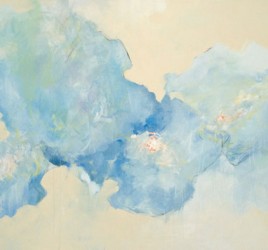